These two most important documents, dated shortly after J.S. Bach’s death, are mentioned by many scholars. The Inventory is included in Spitta (1880) of which I have an English edition.

I have recently read quotations from the original German documents, and see clear contradictions. To dispel doubts, I would like to read both documents in their original German version. Unfortunately, I have not found them online.

Should any member of Jackrail have them, please contact me privately at jclaudiv .at. gmail.com, thanks! 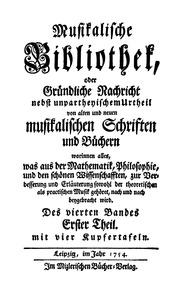 Hi Claudio,
Spitta’s “J.S. Bach” is available in a German edition at archive.org under
https://archive.org/details/johsebbach01spit
and

Thanks Andrew and Michael for your links: I was able to download both sources with no problems. Searching within them is a significant chore, however, because they are photocopies that load slowly and have no possibilities for inside search.

With the inventory in Spitta things are different. I compared my English version with the download, and although the general disposition of the several volumes agree, it is not so for the Appendixes. In the English version the Inventory is found in “Appendix B to vol. III” and located at the end immediately before the final musical examples. The Appendix in the German version is completely different in contents.

Found the Inventory on pages 956ff. Lovely to see how so many quote “myths” out of translations, retranslations, quoting from different sources and all. The original list of keyboard instruments found in J.S. Bach’s house when he died is as follows, each with its estimated worth:

So he had 4 harpsichords (one very decorated), 1 small harpsichord (one-manual or even a virginal), 2 Lautenwerks, and what looks like a small octave virginal.

Edit: “3, Clavire nebst pedal” do appear in the inventory, but in a later paragraph, when Johann Christian declares he had it earlier as a gift and are therefore out of the succession.
It has been presumed that these “Clavire” should be clavichords, based on the fact that the very few surviving stringed keyboards with pedalbords are clavichords. However, they prove nothing, as the earliest extant one was made well after Bach’s death. Conversely, it is well known that quite a few extant harpsichords today bore holes below the keyboard, clearly implying that once they carried an attached pedalboard. It thus appears that, contrary to an often reported statement, harpsichords with pedals were more common than clavichords with pedals.

Claudio, depending on your pdf viewer, you may be able to convert the image-pdf in a text-pdf with a couple of clicks. Then you can search through. Depending on the quality of the images, you will have a good or bad character recognition, but still worthwhile.

Thanks Andrew and Michael for your links: I was able to download both sources with no problems. Searching within them is a significant chore, however, because they are photocopies that load slowly and have no possibilities for inside search.

Thanks Domenico, but these are scans. I would need an OCR, and one geared for German gothic characters!

Yes Claudio, the premium versions of the pdf readers/editors have an internal ocr engine so you don’t need an external ocr. But if the chatacters are gothic it’s another story.

Thanks Domenico, but these are scans. I would need an OCR, and one geared for German gothic characters!

The type-face of the 1921 German edition of Spitta (in the two links I sent) is Roman, not Gothic, so could be OCR’d, but the print is quite small.

Thanks everybody but, as I wrote before, I was anyway able to find what I was looking for!

For future use: the text of both Spitta volumes has actually been OCR’d well on the archive.org site, so you can quickly search the text of both volumes electronically online, using the “search inside” function (icon: a magnifying glass), for example searching for ‘Mizler’ or ‘Spinettgen’.

Or maybe download the OCR txt file for each volume, if you want to work offline (scroll further down the page for this).

The search function is convenient in a work of ca. 1000 age-yellowed page.

(sorry; this was sitting in my Outbox for a couple of days without
having been sent. I send it now for historical purposes)

Sorry I don’t have time to look at this stuff right now, but the most
reliable source for the inventory would be the critical ed. published by
the NBA as ‘Bach Documente’, I guess vol III. Spitta may have been
accurate but it’s good to have another, and more recent, set of
editorial eyes on it.

Do you know Joel Speerstra’s book on the pedal clavichord? It provides
extensive, and new, documentation for the use of the instrument. It’s
interesting that pedal were attached to h’chords, but c’chords were so
much more common than h’chords that the latter couldn’t have been what
Bach would have had in mind as a usual practice instrument.

Bill Jurgenson once characterized the term “Clavier” perfectly when he
said he meant, “Pull down any convenient keyboard from the shelf. 99
times out of 100 this would have been a clavichord.”

Thanks Stuart. I have sent you privately my opinion on Speerstra’s book. The historical parts are largely derived from Forkel, a source that great musicians, from Spitta to more recently Peter Williams, have deemed utterly unreliable in its implications about the technique and instruments favoured by J.S. Bach. Among these musicians were keen clavichordists such as Ralph Kirkpatrick and Gustav Leonhardt. Personally I find that the unreliability of Forkel (1802), at least some important parts of his Bach biography, is demonstrated by the open contradictions with the plentiful of evidence dating from J.S. Bach’s lifetime.

I cannot possibly agree with Jurgenson either. Clavichord (mostly unfretted) making in German lands only started in earnest after 1742. Before that date, my latest Boalch 3 search gives me, for extant German made instruments, 20 harpsichords against 9 clavichords (including fretted ones!).
I am ready to accept that clavichords were more common than what this statistics seems to show, but if it were right that during J.S. Bach most productive period, up to c.1742, 99 out of 100 stringed keyboards were clavichords, there would be many more extant today.

This discussion, needless to clarify, has hardly any bearing on the musical interest of playing J.S. Bach on the clavichord.