Who can explain to me the key differences between the double-manual instruments of Henri Hemsch and Pascal Taskin? I am curious as I am in the process of commissioning a new French double.

Excellent question Douglas!
AFAIK the main factor is that Henri Hemsch’s extant instruments were built on average two decades earlier than Taskin, and therefore they better represent the ideal of the late Baroque French harpsichordists. Taskins are in this sense too late, so late that when copying them most makers dispense with typical features of his harpsichords such as knee levers and peau de buffle rank of jacks.

On the other side, as observed to me by Dr. Darryl Miller when I visited the Russell Collection in the University of Edinburgh many years ago, when Taskin refurbished instruments built by others just one or two decades earlier, and the much admired Goermans is a good example, he only added those gimmicks but did not mess with acoustic elements such as soundboard, bridges and strings. So from the point of view of sound there should not be much difference.

It is also significant (as I have analysed in detail in my “Taskin stringing” website) that Taskin’s extant instruments in their quantity have an advantage: you can select for copy the one that best fits the pitch for which you are most likely to use it, and get as a result an instrument that follows mid-18th century ideals not only in dimensions but also in stringing: two most important sound production parameters.

This said, I am sure our makers in this group will note many other aspects that perhaps tilt the odds more in Henri Hemsch favour, or note other details that escape me.

Another important detail: of many Taskin instruments we have also his stringing list, and in my website I show that he varied the strings according to instrument size and general pitch, yielding always a very similar tension curve. In other words, we can accurately follow Taskin’s stringing gauges and string tensions, something we cannot do accurately with other French makers.

This said, present-day makers may argue that the stringing list may be important for restoration, but the modern maker knows how to derive a stringing list that ideally fits what the instrument is asking for tension- and sound-quality-wise, and that does not necessary means to follow an historical list.

Back in the 1970s Hubert Bédard in Paris was much interested in comparison among French antiques. Around 1970 I remember that collating the Dumont, the Collesse, the Goujon (and perhaps others I no longer recall) and the Taskin, sound-quality wise everybody preferred the latter.

As a consequence, and in the same way as back in Boston Hubbard had taken as his model for French doubles the Yale’s Taskin, Bédard took as his model the Paris’s Taskin.

This was before the now-much-admired Hemsch 1761 was discovered.
I do have records by K. Gilbert where both instruments are played, but I do not trust records to judge about the real-life quality of musical instruments.
Decades later, surely in Paris in the Citè de la Musique lots of players must have compared the Taskin and the Hemsch, and found that their sound is different.
Is any better? Is any more similar to older instruments such as Blanchet? I would really like to know.

Hi Douglas, Well it’s been a long time since I studied the fine details of the Hemsch and the Taskin, but in our workshop we made several Hemsch instruments and several Taskins. All I can say as both a player and a maker is that I far prefer the sound of the Hemsch. It’s much bolder and more masculine, while still holding that ultimate delicacy of French instruments. The Taskin has fascinating and important stringing information to impart, and like Claudio that is something I have studied in depth. Now how a big French instrument is going to sound depends more on the maker than anything else, but my opinion is that the Hemsch wins such a comparison hands down. But to tell you the truth I even more prefer Stehlin, and I would say he is my ideal tone world. There’s a Stehlin in a small museum in he south of France whose name escapes me at the moment but there is nice youtube of Justin Taylor playing. I spent a lot of energy and emailing a couple of years ago to find out how we may be able to get measurements and/or detailed photos of that Stehlin to no avail. If I were going to make a big French double now Stehlin is my man.

Sorry this does not answer your original question. which is a very excellent one. But I suspect that ultimately this is a choice between BMW, Audi, and Mercedes Benz - a very personal matter of taste.

I agree with CDV that recordings can be misleading, but this one is excellent and indicative and certainly has the character I described. What a sound!

Hi Andrew,
I believe the Stehlin you mention is in Saint-Quentin, which is the north of France, and not the south.

I remember writing to them a few years ago. Never got a reply. Nor did I manage to speak to anyone over the phone.

I think this is the Justin Taylor youtube video Andrew is speaking of: Jean-Henry d'Anglebert, Sarabande / Justin Taylor - YouTube

I am sure you already know, but what about the 1760 Smithsonian Stehlin? There is a drawing as well, sold by Marc Vogel.

I second Andrew’s opinions about Taskin, Hemsch, Stehlin though I only listened to a Stehlin a couple of times. The Taskin and Hemsch I listened live (not the original but new based-on harpsichords).

There’s also this 1751 Hemsch worth listening to:

Thank you all for your comments and links. The Stehlin played by Justin Taylor does sound wonderful. (Ken Yoshida is an excellent producer, and also a fine harpsichordist.) On the other hand, I once played a recital on the Smithsonian Stehlin and found it too ‘puffy’ for my taste (though obviously a very fine instrument).

The Hemsch from the GL Forqueray recording is beautiful, exactly my taste.

I shall explore further, also in discussion with my builder, Max Doronin.

Indeed Andrew, I have this record it and is my main example for my assertion!
Incidentally, by sheer luck I visited Paris in 1975 when the Hemsch 1761 had just been acquired by the Conservatoire, it had just been cleaned and restoration was just starting, so it was pretty much in the state it was found (so told me by Bédard and Dumoulin). I took then the picture I attach (scanned in the 1990s from a colour slide). I am sure you will like it. 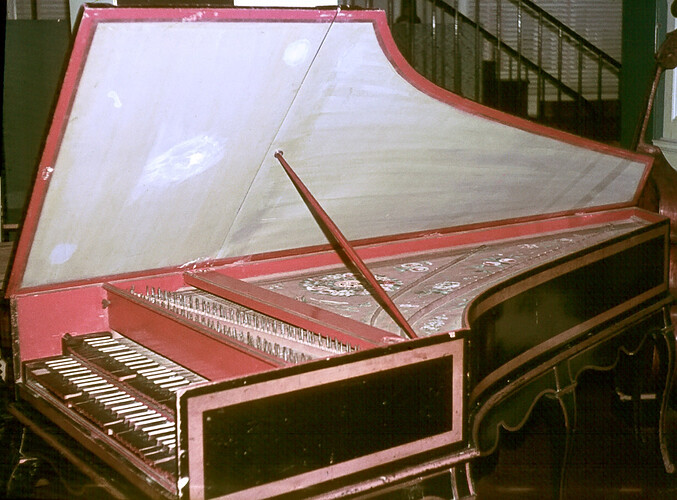 It is remarkable that most complaints I hear about not been able to get in contact with anybody in instrument collections (or important church organs), let alone be allowed to play the instruments (often not even to see them from a short distance) are mostly referred to France? I have awful stories, that I contrast with the kindness I got in the other two countries where I have visited a few keyboard collections (UK and Italy). And even in Italy I should say that if you try the “direct contact” route you often fail to get answers: it is best to go there, and approach on site the lowest-ranking person possible …

. In church organs, your best bet is a cleaner!

Of course there are notable exceptions, e.g. in Paris the openness of the Conservatoire collection c1965-1985, but this was thanks to Bédard and, let us remember, he was a Canadian …

Mail test, as I replied to a post via mail but it didn’t reach the forum…

I think this is the Justin Taylor youtube video Andrew is speaking of: https://www.youtube.com/watch?v=p4A-TV7HW1c

I am sure you already know, but what about the 1761 Smithsonian Stehlin? There is a drawing as well, sold by Marc Vogel.

I second Andrew’s opinions about Taskin, Hemsch, Stehlin though I only listened to a Stehlin a couple of times. The Taskin and Hemsch I listened live (not the original but new based-on harpsichords).