With uncertain dates for Bach’s youthful works, it is certainly difficult to state which is “Bach’s earliest masterpiece”. Many will perhaps advocate the “Capriccio sopra la lontananza …”, among his first really involved works.

I first heard it in the 1970s in a remarkable LP by Gustav Leonhardt playing on a Zell harpsichord in 1963. If I remember well, GL had recently produced records playing Bach on his Dulcken replica, but this may well be his first LP playing on historical museum instruments.

The recording was later available in a CD with some of the pieces, plus others. And I just found these pieces in YouTube where, for some reason, the three movements are in unrelated videos.

Here is the Prélude:

For reasons that are not clear the Onebox player links work fine in the web interface all work fine but the youtube links in email all result in Video Not Available, at least for me here in Australia.

may well be his first LP playing on historical museum instruments

Just for the record (ha!):
Leonhardt’s recording on the original Kirkman in the Castel of Amerongen is said to be from 1958. It includes the Capriccio, in fact.
His iconic recording of works by Froberger on the Ahaus Ruckers took place in 1962.
Early recordings made on (among others) the Sko.-Dulcken in 1962 were Bach’s concerti for two and four harpsichords BWV 1060, 1062 and 1065. In the concerto for four, BWV 1065, Leonhardt plays his 1775 Kirkman.

The recordings here are unlikely made on a Zell. The instrument isn’t mentioned on the original LP sleeve as far as I can see. There are only three original Zells, and as far as I know, they weren’t available in the early 60s (perhaps with the exception of the one in Barcelona, about which I know little). I’m guessing this to be the Gräbner copy by Rück of the Amsterdam Conservatory (a very heavy-to-carry instrument. Don’t ask how I know).

As a bonus a TV recording of the sarabande and the French-Suite E-flat-major Allemande, from much later: 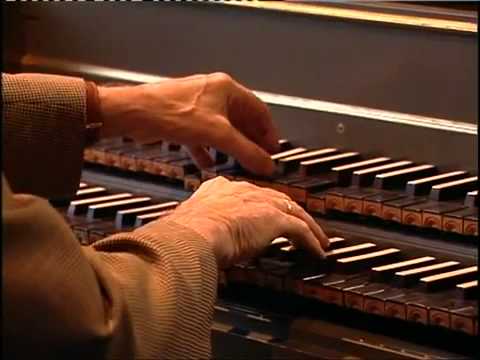 I get the same YouTube “not available” in the US.

Indeed, in n the Jackrail webpage, where the links work OK.
But in the copy I got via email, the links fail with “Video Not Available”.

I have investigated and found the culprit.

BUT in the email that Jackrail creates and sends around, the link is converted to the following

Try to copy and paste and it will error.
Try to click and it will also error: actually the internal link is even more convolute: https://www.youtube.com/embed/3CQeI-YgRMc?autoplay=1&feature=oembed&wmode=opaque !

No wonder it does not work!

Conclusion: when the Jackrail web interface converts a post to email for distribution, for some reason it changes the links, which therefore become unplayable.

Dear Tilman, thank you for the info re earlier recordings of GL on historical instruments. I have now been able to find my original document about the copy to CD. The complete information I have is as follows:

(Needless to say, this LP was published before 1970 and is thus unrelated to the later LP you refer to, which does not include a Zell)

I’m not sure which LP Claudio was referring to, but one oldie in my collection does mention the Zell from 1741, then in Aurich but now I think in Weener. The recording was made in “Nov./Dec. 65/ Feb. 67”, and also used Leonhardt’s Ruckers single from 1648 & his Kirckman from 1775. The 4th instrument on the recording was the anon. Italian from 1693 at the Smithsonian, recorded in Mar 66 & produced by Charles P. Fisher.
Recording catalog# is “SAWT 9512-B Ex”. Almost early 60s…

Thanks!
Indeed, this must be the one. The match is perfect: my recorded date 1966 is an “average”, and my conversion to CD is incomplete and lacks the recordings on the Ruckers.

Ah brilliant, that explains it. I haven’t got all these records here (they’re part my parent’s old collection, still to be catalogued).

The 1741 one-manual Zell was indeed in Weener when I last looked. It was at some point carefully restored by Klaus Ahrend (I think, after this recording was made); unfortunately that information didn’t make it into the Wikipedia entry on Zell. I shortly played on it in 2008, a very nice instrument.

The Ruckers single is now part of the instrument collection in Copenhagen where I saw it on display a few decades ago. I also remember my four-year old self seeing Leonhardt and my father, then still in Leonhardt’s flat at the Amsterdam Nieuwmarkt, on the floor in front of the instrument and shining a strong light into its inside through the keywell. I later heard that a layer of wood had been added to the soundboard during a previous restoration, which may account for the somewhat unsatisfying short-lived sound. At the time, to be sure, I was mostly interested in looking at the pictures of the Leonhardts’ Tintin books. I recall my mom explaining to me that this was an “old” harpsichord, and I kind of wondered what the big deal was, since it was old anyway.

The 1775 Kirkman has in fact been in my possession since 1991 and was recently sold.

There was an article in the New York times today about Joseph Boulogne, aka Chevalier de Saint-Georges

Since at the moment a lot of us are looking for music by Black composers, I tried to look him up on imslp. and I did find him, under the name ‘Saint-Georges, Joseph Bologne’. No solo keyboard music, though. But the scores (easy-to-read manuscripts) to the orchestral works repeat the same material in enough parts they are an easy transcription to harpsichord, if anyone wants to play music say from the opera . And there’s a harpsichord quartet with violin viola and cello in a modern edition. Judy Conrad

BWV 823 is indeed a lovely piece. Leonhardt told me that he thought it was unlikely to have been written by Bach.

In any case I enjoy playing and listening to the piece.

I agree with you Douglas, and Leonhardt’s opinion in these matters has hardly ever been proved wrong. (Don’t know about the low Db: c1704 it was certainly not found in fretted clavichords and rarely in organs, but there were already many harpsichords around going down to GG chromatic except for AAb. As for two successive Rondeaux, they probably were not: according to Basso this is a fragmentary work, so it may well be that there were the customary Allemande and Courante in between). More importantly perhaps, to the usual argument that such an impressively-inspired work is unlikely to be by others, it can be argued that quite a few contemporary works by Bach have survived, and they appear to be not only inferior in musical quality but also in a slightly different style. Which prompts the question: who composed it? A good candidate for my taste is Buxtehude.

My understanding is that we don’t actually know any works which can be definitely attributed to Bach’s youth, so comparisons are impossible. (The Neumeister chorales - well, that’s a discussion for another day, but the evidence for them being JSB is very thin indeed.)

I am most grateful to Claudio for bringing my attention to this piece, and grateful also that it is not too difficult for me to be able to play it! I am also grateful for the links to Leonhardt’s performance.

It is interesting that Leonhardt thought the piece was not by Bach. Ketil Haugsand, however is in no doubt but that it is by Bach, see https://www.youtube.com/watch?v=G58JGv_K4YM

His performance is very different, but equally valid, I think https://www.youtube.com/watch?v=-V69cDC603g&t=3s

With uncertain dates for Bach’s youthful works, it is certainly difficult to state which is “Bach’s earliest masterpiece”…