The Fitzwilliam mentions John Bull as well as Doctor Bull. Can I assume that these are the same composers?

Yes, Dr. John Bull, as he appears on the title page of Parthenia: 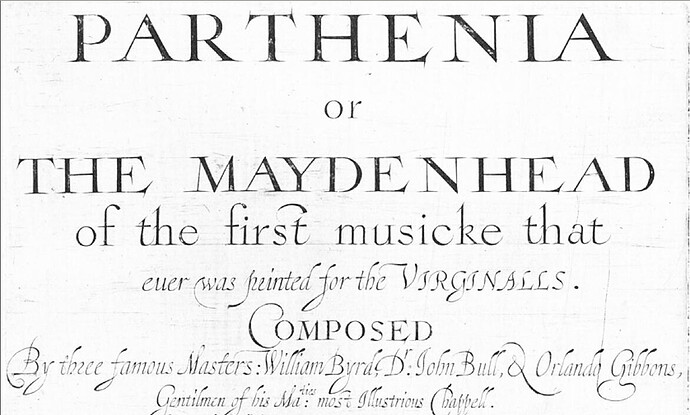 Thanks for the enlightment

This is what the entry in the New Grove has to say:
“An entry in the Oxford University Register relates to his (Bull’s) Oxford DMus of 7 July 1592, and Wood stated that he ‘practised [in] the Faculty of Music for 14 years’, supplicated for the BMus at Oxford on 8 July 1586 and was admitted to the degree the following day. Wood added that he would have proceeded to the doctorate at Oxford ‘had he not met with Clownes & rigid Puritans that could not endure Church music’. He therefore supplicated for the MusD at Cambridge (which enabled him to obtain the Oxford DMus by incorporation in 1592): that he was awarded this degree by 1589 can be assumed from the reference to him as ‘doctor’ in his certificate of residence in connection with an assessment for the lay subsidy taken in the queen’s household in that year.”
Best,
Matthew

…and also from the New Grove I learn that Bull’s family name also has an alternative form, Bouville. No known connection with the Nürnberg musician Christoph Buel/Büel/Buhl/Bul/Bull/Puel/Puhel (1574-1631), on whom there is an entry in MGG (1st ed.) by F. Krautwurst.