The top c on the upper keyboard sometimes would not come back up by itself. A little bit of wiggling would get it back. Réveil-matin alternates the upper two c’s and was unplayable. So I pulled the upper keyboard again and tried again to smooth the entrance to the rear guide pin with no cure. The ZHI arrangement for the rear guide pin allows the slot to elevate over the top of the pin (design or manufacture error); so you have to hope the slot stays above the pin so that it will re-engage on its way back down.

Looking at the entire keyboard it became apparent that there was a significant gap between the rears of the c and c# considerably larger than elsewhere on the keyboard allowing the rear slot of the key to move out of alignment with the top of the pin.

The fix is to add a shim to the side of the key behind the guide pin with anti friction tape on top.

Lee Valley supplies double sided turning tape that I used for the shim as well as the anti friction tape.

What model of ZHI instrument is this?

How far do the rear guide pins emerge out of the keys when at rest?

When the keyboards are in the instrument, it should not be possible for the rear of the keys to rise so far as to let them lose contact with their pins. Indeed, if the tops of the pins cannot be seen when the key is fully depressed in the instrument, they are too short. 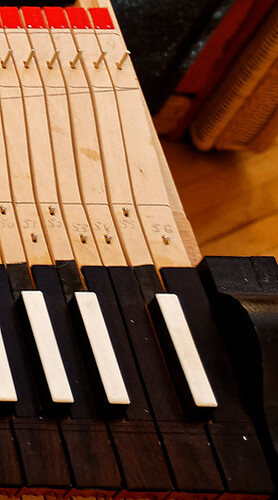 David is correct: There should be no possibility of the rear of the upper key rising beyond the height of the guide pin. Your fix might appear to solve the problem, but creates others. The keys must be guided by the guide pins, not by rubbing against adjoining keys.

Do you have a ZHI French Double, or Flemish? For both, the chromed brass guide pins were 1-1/2˝ long, the balance pins 1-1/4˝. The Flemish Double construction manuals say the upper manual guide pins should project from the backrail 29mm. For some reason, the French Double says only 22mm and its drawing is the same. That’s probably a bit on the short side.

So, I suggest either the wrong pins were used, or the correct pins were hammered too low in the backrail, and/or your upper keyboard keydip is excessive.

Thank you Carey and David for your observations. The guide pins are much less prominent above the keys than shown in David’s photo.

The instrument is a ZHI French Double V. According to the construction manual the upper manual key dip should be a ¼ inch, but as the key is on a slant the dip decreases the closer you measure to the balance pin. I do see about that much dip or perhaps a bit more.

This is the one key that gave trouble. If a number of keys had the same problem, I’d look to the jackrail to decrease key dip.
ZHI outsources their keyboards and I doubt that the guide pin heights were changed from how they came from the factory.

The shim and tape added 0.9 mm to the key width. It wouldn’t surprise me if other keys are guided by their neighbors.

Key dip is measured at the front of the natural head: 6 or 7mm is fine for the upper keyboard of a French Double.

ZHI Fr.D.V would date from the early 1980s, and the keyboards at the time were not outsourced. The keyframes had to be assembled by the kit builder and pins inserted.

It’s a problem well worth rectifying if there’s any possibility of keys being guided by their neighbours like you say. Keys must only track up and down the required amount, and there’s no situation where a key should be able to touch its neighbours.

More careful perusal of the construction manual confirms that you are correct that ZHI took keyboard construction in-house for my version (ordered in 1996 according to inscription under the jackrail felt). I still don’t see any mention in the manual of putting in rear guide pins.

I see some variability in key dip measured at the front of the key. The problem key goes down ⅜; others closer to ¼. Yes, that extra ⅛ can hang up the key.

Another method might be tucking in extra felt in the jackrail where needed.

Thanks for your reply and extra info.

If the keydip is so variable, perhaps that c’’ or c’’’ jack is too short compared to its neighbours, and therein lies the cause. You would not experience the same key sticking in a Flemish Double because the keydip is stopped by a touchrail, rather than only on the jackrail as in a French Double.

Yes, you could tuck in a little extra jackrail cloth for that note, but if the jack is too short, reducing the keydip on that single note could make it sound too late: There must always be some free fall after the last pluck.

The bottom of the jack could have been cut too much, or a layer of the jack rail cloth may not extend far enough. This being the end key makes me suspect that as a possibility - certainly worth a look.

If you need to lengthen the jack (I’m assuming the jacks are current design, I-beam in cross section), you can do so by using strips of adhesive paper like mailing label material, bending one or more layers around the bottom, sticking them to either side of the narrow part of the jack. I’ll attach a photo to try to make that clearer.

The back guide pin, like the balance pin, is friction fit into a hole in the rail. While it is more troublesome to raise a pin than to hammer it farther in, it can be done. I generally use diagonal cutting pliers to grasp the base of the pin just at the rail, and insert a fulcrum (small dowel or the like) to use to pry against. You are only needing to raise it a few mm to solve the problem. If the hole is drilled all the way through, a much can be used to drive it up from the bottom, but that involves a good bit of disassembly (remove all keys) and setting up appropriate supports. 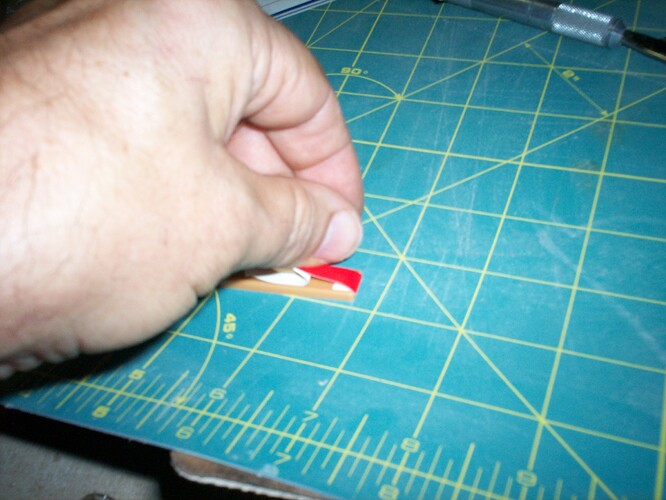 George-
Something is irregular about that note that makes it behave differently than other notes.
Diagnose and find the irregularity, and fix it. Treat the cause, not the symptom.
There could be something wrong with the jack, with the jack rail cushion, or at the balance rail.
Make it be like the others.

A photo would be useful.

Jack 56 is shorter than 58, but there’s a shorter jack a few notes down that never gives trouble.

By gently pressing down adjacent keys, you can see 56 with more key dip than 58, and that 53 & 55 have the same key dip as 56. I suspect the entire upper keyboard has excess dip.

The construction manual suggests adding layers of masking tape under the jackrail felt - easier than lengthening many jacks.

Unless or until other keys begin hanging up on the guide pins (I’ve been putting up with just that one problem key since I got the instrument), I don’t see anything broken that needs fixing beyond what I did.

How particular are you? It sounds like your instrument has inconsistent jack heights and would benefit from thorough regulation. This is not uncommon.

All the quills in a given choir should be the same distance below the string at rest. The jack height should be examined without the dampers.

Setting the keydip accurately is something which can even defeat fulltime makers. The construction manual is talking about global adjustment, rather than trying to correct a keydip problem on single notes. Generally, the front 8´ requires an additional layer of jackrail cloth compared to the other choirs. Avoid a sticky mess and don’t try to use layers of masking tape. Fine adjustment can be made with a strip of thin card or even paper. The cloth should be nailed, of course, never glued.

When you play and hold a chord on the coupled lower keyboard, I consider it perfection of adjustment if those same coupled notes on the upper cannot be depressed any further.

If you get the keyboards right, the jack height even and the quills with consistent projection, the instrument regulates itself.

I gently pushed down a number of keys until I could feel the quills in contact with the strings. Variability looks sub millimeter.

Coupled, the upper keys will not go any farther down when played from the lower keyboard.

And the stagger is good. Don’t want to mess that up.

I just thought to check the key dip coupled: looks like a ¼“; uncoupled it’s more.

It’s been some 45 years since I built a ZHI Flemish I and in the meantime haven’t really had a deep look at the much evolved construction manual.

Thank you for the learning opportunity.