Hi,
I was wondering: are there any drawbacks in gluing a painted canvas on a harpsichord lid, as opposed to directly painting on the lid? And, is there any historical precedent of gluing a canvas on the lid?
I am asking because I could order a painting to an artist but he lives far away and it would be much simpler than the usual lid painting. But I am afraid the borders of the canvas would detach from the lid or be not neat and tidy. Maybe I should nail/glue a batten on the borders, that would appear neat and would prevent the borders from detaching, but I haven’t seen anything like that on French lids…

Thanks,
Dom
(who is still researching about fancy tuning keys - making, hope I’ll be able to post something in a month)

Hi Domenico, your questions seems to be a typical result of our globalised world. I would be surprised if anyone comes up with a historical example. As you will know in 18th century Paris journeyman just carried the painted lid walking through the busy streets from the artists shop to the instrument maker’s shop. The Historically Informed Answer would be: look for an artist closer by, or find a harpsichord maker closer to the artist. Having said that there is nothing wrong with new ideas and creative innovations, so why not?
Did you consider the impact it might have on the projection of your instrument? The open lid has a function of reflecting sound towards the listeners. Unless your canvas is covered with a mirror-like, strong layer of varnish the canvas will disperse the sound more than a wooden lid will do. Could be an advantage in a small room, could be a disadvantage in a larger concert hall.

I just didn’t think of the impact on sound. This rules out my solution. It’s not simple to find an artist near to me, that’s why I thought about ordering a canvas. I’ll search better here in town or in the near towns.

(I am the maker, so I should send the lid and have it re-sent after painted)

I find the short wikipedia entry “Transfer of panel paintings” interesting. Many panel paintings were transferred to canvas in Napoleon’s time. Not sure if the reverse is possible.

If I remember correctly, I think Vasari detailed that (oak) panels for paintings where prepared with gesso layers made from chalk or gypsum (and some lead white) in hot glue from parchment scraps. This would become very hard and after carefully sanding each layer with pumice it would have had a very smooth finish. Such a ground would definitely reflect both light and sound very well.

Did not want to use the historical papers I had from ZHI, disliked the green moire’ and dolphins. I found, in modern wallpaper, an suitable pattern that I liked (egrets on an abstract, less busy background). Prepasted, very easy to apply and trim, used the ZHI borders on the lid also. I like the result, and do not care that it’s not a strictly historical option.

Regardless of historical practice, from my study of fine art my understanding is that if you use canvas linen and so on for a platform for oils or acrylics that it has to be stretched on a bearer frame of some strength and you have to stretch it really tight. I think it was never done to glue canvas to a substrate as you cant get the tautness necessary and I believe it would soon bubble, wrinkle and warp. I may be wrong but that’s certainly not common. So you would have to have a bearer two of three centimeters deep for the strength of the wooden bearer to nail to the lid and that sounds infeasible to me, as well as ugly.

There have been over the years in the various mailing lists discussions and arguments over the reflective and sound enhancing properties of the lid and how it influence tone and projection. Even discussions on the effect of lid sticks as well! It’s all rather controversial. But I am sure that a heavy canvas would strongly damp acoustic reflection no matter how highly varnished due to the nature of the material. I don’t think papers affect the sound much, and it’s a different material.

As a left field idea you could have an artist make an oil painting and scan it at an industrial graphics house and giclee print it on the lid, which to a certain extent can be made almost indistinguishable from an actual painting. Would probably cost more than shipping a panel two ways, but it’s a curious thought that just occurred to me.

Yes, and I should have known and I should have thought of it. Once I lined an Italian harpsichord lid in silk (I live in a town with a long established tradition in silk production, San Leucio: https://en.wikipedia.org/wiki/San_Leucio) and I did exactly what you say: I stretched the silk as I could. The lid has a “tongue” 3 cm wide running along its borders and thus closing the space in which the silk is - no problem with the silk detaching, after 13 years.
So thank you for having pointed out this as well, it isn’t feasible with a painted canvas (not easily, at least).

As for the sound, this problem has been pointed out by Pieter as well. So I have now two good reasons for not going that way.
I have asked myself, at times, whether the silk was dampening the sound or impairing its projection. Indeed, I have never listened to that harpsichord with a wood-only lid so can’t say for sure. Of course I have listened to it without lid. I’ve played and had it played in concert without lid as well (continuo and two-harpsichords). My guess is a bit of dampening does occur, I will have to try.

Some photos (sorry for the terrible lighting). 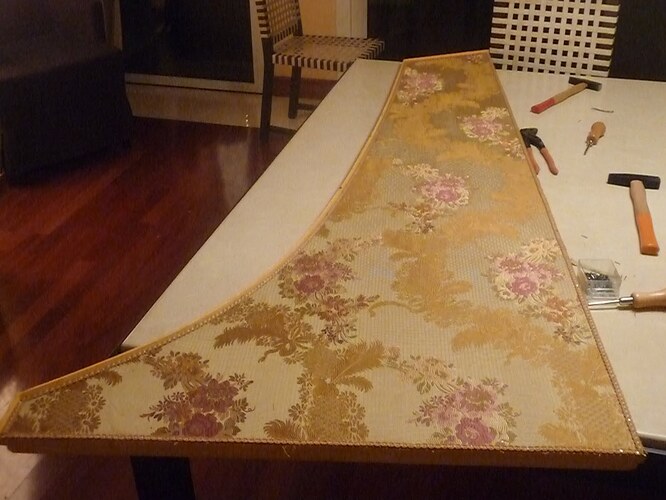 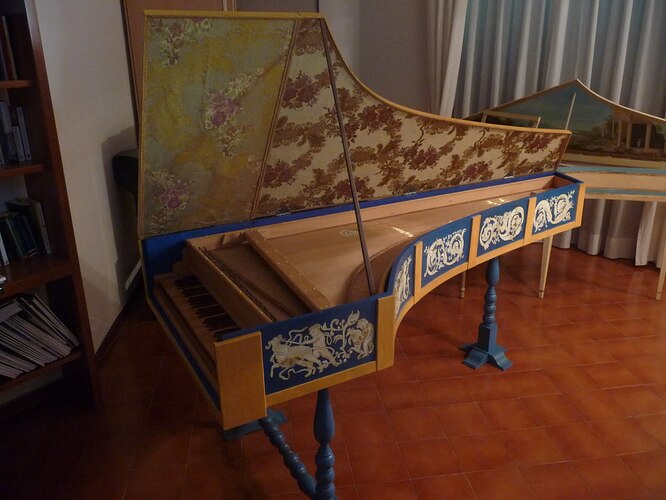 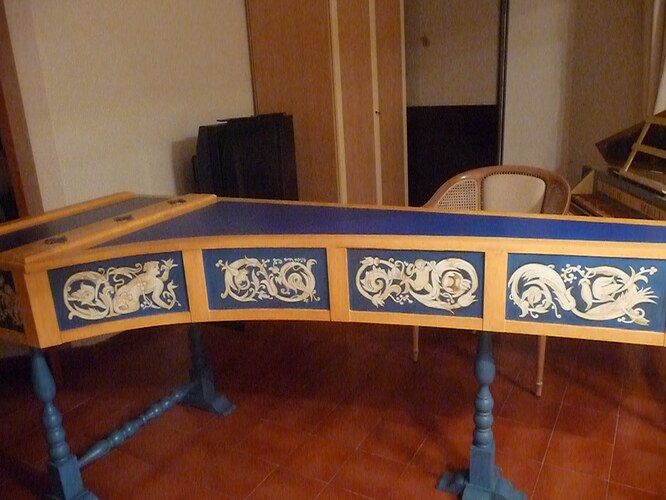 A neapolitan harpsichord by Mathias Griewisch, with the lid interior lined with silk and painted. Don’t know if the lid absorbs the sound, it’s a beauty.

The making of the same instrument by Matthias Griewisch. The video ends with him playing. I love neapolitan harpsichords (made one from maple), and this one strengthens my love. I find the simple blue of the case exterior charming in contrast with the silk-lined lid interior.

A neapolitan harpsichord by Mathias Griewisch, with the lid interior lined with silk and painted. Don’t know if the lid absorbs the sound, it’s a beauty.
https://www.youtube.com/watch?v=D3yEkWD2c98