Here is a cent table copied out from my old web page at
http://www-personal.umich.edu/~bpl/larips/math.html

So, if we are considering only “how many cents wide of pure are the major thirds”, it would be:

The F-A and the C-E are the same as they are in 1/6 Pythagorean comma meantone (the 55-division).

The widest major third is at E-G#, and it is smaller than Pythagorean. So, there are no full commas of error in any major third anywhere. It is smoother than the widest thirds we get from Vallotti, Young 1 and 2, the Kirnberger temperaments, the Werckmeister temperaments, Barnes-Bach, Kellner, and many others. I showed all of this in the 2005 article. I explained again in 2022 why it is important to avoid all Pythagorean thirds, according to 18th century expert taste (citing Sorge, Marpurg, et al).

Good tuning is about much more than merely keeping the thirds inoffensive, of course…! The scale handling is part of the argument, along with all the other enharmonic considerations. As I showed here and in the new article, to play the Goldberg Variations, we need to have all of the 19 notes from Fb to A# (i.e., Fb, Cb, Gb, Db, Ab, Eb, Bb, F, C, G, D, A, E, B, F#, C#, G#, D#, and A#).
http://www-personal.umich.edu/~bpl/larips/testpieces.html

So, if we are considering only “how many cents wide of pure are the
major thirds”, it would be:

The F-A and the C-E are the same as they are in 1/6 Pythagorean comma
meantone (the 55-division).

The widest major third is at E-G#, and it is smaller than Pythagorean.
So, there are no full commas of error in any major third anywhere. It
is smoother than the widest thirds we get from Vallotti, Young 1 and
2, the Kirnberger temperaments, the Werckmeister temperaments,
Barnes-Bach, Kellner, and many others. I showed all of this in the
2005 article. I explained again in 2022 why it is important to avoid
all Pythagorean thirds, according to 18th century expert taste (citing
Sorge, Marpurg, et al).

Thanks for these figures. I now recall that what bothered me at the time
was the “bad” E-G# third. Certainly it is much more frequent and useful
than the four following thirds in your table, which are all better. What
is the justification for placing the worse third on E? Another objection
I had at the time is the fact that this temperament favors the flat
side, where all the thirds with the same number of accidentals are
better. In my opinion a good temperament should favor the sharp side,
because minor keys need the good thirds of the parallel major keys.

What perplexes me over the past 18 years is: people complaining about an E-G# or an A-C# that they wish would be different (narrower), but then they turn around and use “Kirnberger 3”. It has the same size in E-G#, and its B-D#, F#-A#, Db-F, Ab-C, and Eb-G are all worse than mine, but yet those six intervals out of 12 somehow don’t bother the people who say that my E-G# or A-C# are undesirable. [I have C#/Db equidistant between A below and F above, and explained why.]

Anyway, the new article is here! It has plenty to say about Kirnberger and those other angles. It emphasizes working by ear at a harpsichord, and not getting stuck in numbers about anything.

Many thanks for the clarification, Brad. I’d read your original article
at the time, but that was years ago. So I guess it’s a matter of taste.
I prefer a good E-G# to a good Ab-C, because it’s much more frequent.
Which is why I prefer Neidhardt’s temperaments, which never have E-G#
wider than Ab-C. (I also believe that considering the notes
statistically can’t prove anything. What counts is the musical context.)

The evidence in the notes (as explained in the 2022 article and in
much my older web pages), where Bach’s music so frequently needs a
good Ab (and beyond it to Db and Gb) both melodically and harmonically.

But he needs a good G# much more frequently. How many Bach keyboard
works in Ab major (besides the WTC, or course)? Whereas, for keyboard:
French Suite, Violin Sonata, Flute Sonata, 2- and 3-part Inventions -
not to mention the organ works - all in E major. Why do these get a
third that’s worse than that of a key Bach doesn’t use?

Nor do I think melodic considerations should be taken into account when
it comes to choosing a temperament.

I’m referring to Ab the note, not only Ab-C the major third.

As I suggested in 2004-5, and wrote more thoroughly in 2021-22, tonality doesn’t behave the same way (symmetrically) for flats and sharps. It matters how the compromises are done, when setting a pitch that is supposed to work either way. If there is some note that is some amount out of tune for the context of the other scale notes around it (sharps that are too sharp, and flats that are too flat), it’s more tolerable to have that out-of-tuneness happen in Ti or Mi of the scale, than to happen where the out-of-tune note is Do or Fa.

That roster of the keyboard pieces is not meant as a pretext for statistics, but it’s observation that all the notes of all the scales must work. We need 24 differently named notes to be able to play the Inventions and Sinfonias, learning how to play keyboards in a singing melodic style in these 15 keys. (We’re not going to bend clavichord tangents or retune the harpsichord for every piece. We’re also not going to go read organ construction books to figure out monochord calculations to tune harpsichords. We’re just going to tune the harpsichord by ear and then play the music…) And, being “in” a key doesn’t mean merely looking at the key signature or playing root-position triads. Every note in the score must make sense in its scales, whether it’s notated as an accidental or in the signature.

In the first piece of the WTC, the prelude in C major demands Ab before the fugue demands G#. Whatever compromise is chosen for the pitch of G#/Ab, it must sound OK as both…within all the scales that ask for Ab, and within all the scales that ask for G#. Bach says on the title page of the book that we must be able to play in all the major scales, and in all the minor scales. (Not triads, and not isolated major thirds, but melodic music based on scales.) Where Kuhnau’s first two books advertised and presented exemplary pieces in 7 of the major scales (Ut Re Mi), and 7 of the minor scales (Re Mi Fa), Bach in taking over Kuhnau’s job is going to make us play music in ALL the Ut Re Mi and ALL the Re Mi Fa scales. We must be able to do everything. Here are Kuhnau’s title pages and pieces:
https://imslp.org/wiki/Neue_Clavier-Übung_I_(Kuhnau%2C_Johann)
https://imslp.org/wiki/Neue_Clavier-Übung_II_(Kuhnau%2C_Johann)

Once the trained keyboardists can play in every key, and tune the instrument so it works in every key, we can go on to do the jobs of improvising continuo, improvising pieces, composing, arranging, teaching, playing in ensembles, and everything else. We can play pieces with 19 different notes in them, like the Goldberg Variations, or the Art of Fugue with its required 5 flats, 7 naturals, and 5 sharps. We don’t have to worry that any of the music will ever sound bad from the different uses of sharps and flats on a 12-lever keyboard.

To remind myself how some people choose to live, I set up Vallotti this morning. 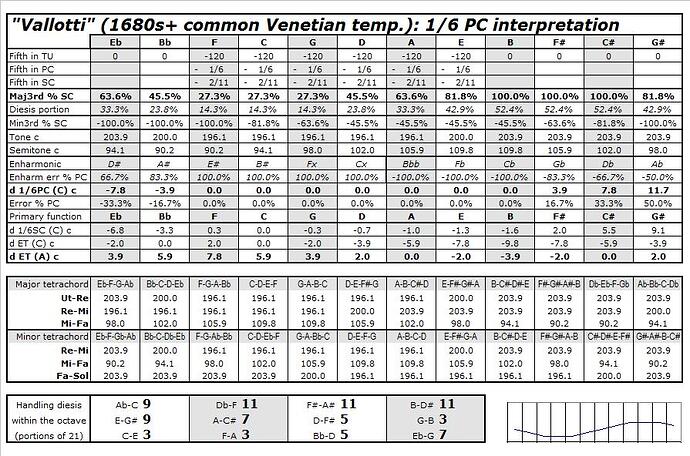 895×592 145 KB
In the Goldbergs, I played all the G minor variations, all the canons, and 19 and 22. In the G major pieces, the note that screamed at me the most was D# being so high above B, Pythagorean. As a 10th or a 17th above B in the bass, it’s worse. I played through the WTC 1 preludes and fugues in Bb minor, B major, C# minor, and E major. The Pythagorean thirds that occur within those WTC pieces made me want to stop playing harpsichord and go do something else.

I am on board with Sorge’s dislike of Pythagorean thirds, as stated in his 1744 book, page 12. It’s a primer of keyboard tuning. He said he would rather listen to cats and dogs attempting music than to listen to a keyboard set up with any Pythagorean thirds. "Ich lieber die Katzen und Hunde wolte musiciren hoeren, als einen Clavieristen mit seinem auf solche Weise gestimmten Clavier oder Orgel.”
https://imslp.org/wiki/Anweisung_zur_Stimmung_und_Temperatur_(Sorge%2C_Georg_Andreas)

Thanks, Brad. I guess everyone has their own way of hearing music. My
only concern, when it comes to temperaments, is their major thirds. Any
note that has only a melodic rather than harmonic function is not a
concern. You mention Vallotti and Kirnberger and others with their wide
thirds, but what is it you don’t like in Neidhardt’s various
temperaments, in partcular 1724 “Dorf”/1732 “Kleine Stadt”. The widest
third is only 17.6 cents off, which is less than some of yours.

Thanks Bradley for mentioning Kuhnau. I can’t recall where it is exactly, in which of his books, but in one Preface he says something I have always liked:

Let him who dares criticize show forth yet better.

As somebody myself who does a lot of (computer) music engraving, I have always found it interesting that Kuhnau bought his own copper plates and engraved them himself, to save costs apparently. (Reference needed

but I believe this is true.)

I hope you’re using the corrected version of it. It’s been wrong in New Grove and some other reference books and articles. Full details, plus my setup instructions by ear:
http://www-personal.umich.edu/~bpl/larips/errata.html

So, it’s like Vallotti but moving F, Bb, and Eb lower, and B higher.

As I’ve pointed out: If using any of these, remember that the organ temperaments of Werckmeister, Neidhardt, and Sorge were not designed for the timbres of harpsichords or clavichords, or for day-to-day work. Nor are the tuning formulas in those organ treatises presented as practical hands-on methods working by ear at stringed instruments. Finally, eighteenth-century musicians were unlikely to have read those treatises of mathematical formulas unless they were organ builders. If they read music books at all, it would have been primers like Marpurg’s from 1756, telling them to balance the foible qualities of tempered fifths by ear.