A post was split to a new topic: UK Musical Instruments Resource Network

Thanks for mentioning the Taskin child’s instrument. I did not bring that one up (and no offence intended!!), for I have always thought this to be a unique one-off for the child of a wealthy patron, and in no way representative of a tradition of making children’s or beginner’s instruments, hence the complete lack of other extant examples.

I suspect Pasquali may be simply saying it’s better not to use say a Ruckers with largish key span and stick to English instruments in general, rather than saying go out and get a child’s harpsichord, like a 3/4 violin etc.

Thanks, Lewis, for pointing out the Taskin instrument. Pasquali puts the suggestion of using ‎narrow octave span instruments as a “Proposal” at the beginning of his book, which suggests ‎that it was not a common practice. The fact that only one such instrument has survived seems ‎to confirm this.‎

Certainly full-range instruments with a significantly narrow octave span, were very rare, and AFAIK only the Taskin 1786 survives.
On the other hand, a relatively large number of octave spinets survive, with correspondingly shorter strings, small overall case and keyboard size, and matching narrow octave span. I took the pictures I enclose in the Victoria & Albert Museum, London, decades ago, 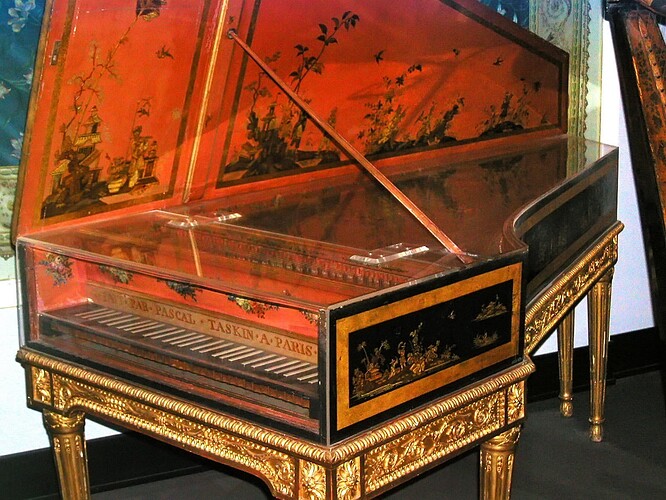 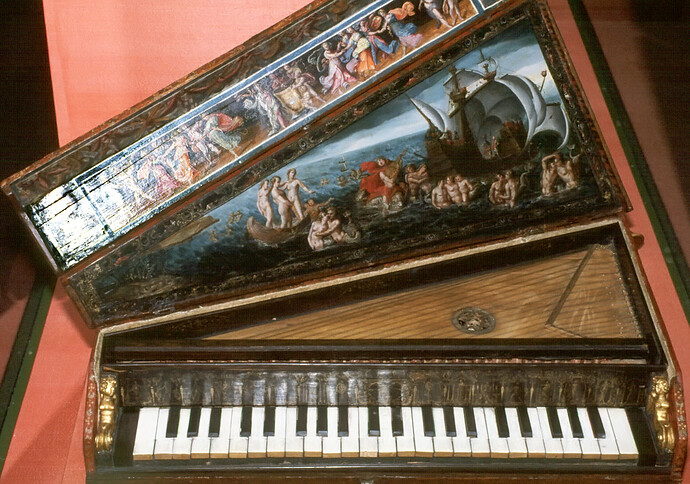 While it is slightly later than Pasquali, a 1797 letter from Sébastien Erard (who also made harpsichords) is revealing with respect to contemporaneous views on child-sized keyboards. He wrote to discourage a client who requested such an instrument:

‘The pianos you mention to us to use for children beginning to learn are no different than ordinary square pianos, on which we had thought of mounting a small keyboard proportionate to a child’s hand. We can tell you that we do not make these keyboards to special order because nobody uses them. We have completely abandoned them. The reason is obvious; one would have to make these keyboards that grow with the child’s hand, which is more than difficult and everything that one has been able to imagine in this way has been a failure. Anyway, you agree that these keyboards would have the very great disadvantage of tightening up the child’s hand, by letting him control that habit. Instead one should try to help him gain facility on a big keyboard as early as possible. In this way, Monsieur, we believe that you should use the normal means, which will give you the most certain and most useful success.’

(Undated letter [1797] from the Erard brothers in Paris to M. Pascault in Cognac, department of La Charente, my translation)

Claudio, thanks for mentioning octave spinets. I thought about them but have never played on one, so I didn’t have a sense of how the overall small size affected the keys. And an ottavino would be a much cheaper option for someone who did want a child’s instrument.

Were there ottavinos in England? I thought they were mostly an Italian instrument.

And were there indeed many children learning the harpsichord? I suppose some children of aristocracy, but children in general did not have much status in 18c I believe.

Thanks David and Robert.
Of course, ottavine are 16th and 17th century instruments, mostly Italian.
Only once I encountered an 18th century one, in the Paris Conservatoire collection, a very exceptional instrument in France.
By the end of the 18th century nobody was, AFAIK, making small-octave-size instruments any more, as Erard’s letter clearly suggests.

Children’s keyboards which could be put on a harpsichord or square piano were for sale in Paris by one of Erard’s colleagues in 1788. We can read in the “Calendrier musical universal” of 1788, (describing 1787) page 6 the following text, available online for those understanding french.

“Little Harpsichords for children. Because the harpsichord or piano-forte which makes up nowadays the most important part of the education of young ladies, Mr Vernier has invented keyboards which are proportional to the size of the hands of children. These instruments are made in such a way that, once the hands of the child grow, one could put up another keyboard which grows step-by-step with the size of the hands until they are formed, then one places a normal keyboard. This method will shorten considerably the time & effort for children, one does not need to wait until their hands are grown to play difficult pieces and they do not get inevitable deviations from jumps and forced differences when playing a normal harpsichord. Mr Vernier has already made various such instruments for different persons who do recognize the advantages. One could buy one by writing a letter. He lives in Paris, rue de l"Université, fauxbourg Saint-Germain, no 28”.

(my translation). I am afraid the shop is closed now, questions will not be answered…

Jean Aimé Vernier was mainly a virtuoso harpist and had been a child prodigy, so a continued promotion of children’s harps would make sense if it was him. According to New Grove there was also another Vernier active in Paris at the time, a pianist, for whom there seems to be no first name or other information.

Jean Aimé Vernier, the virtuoso harpist and child prodigy, was born in 1769 and raised by his father, according to MGG online.
To me it seems more natural that his father could be the author of the text, in stead of a boy of 19 years old. Fascination for pedagogy comes often later.

I find it fascinating that Mr Vernier is not included in the, quite well maintained lists of builders and teachers in the years 1780-1790. He was not a harpsichord maker, not a pianoforte maker and not a harp maker. Nor was he a teacher in one of these instruments. Building a keyboard on top of, or within a harpsichord is not impossible, but always a job for a skilled builder. Nowhere in his text he invites potential customers to his workshop: he didn’t have one. Real builders didn’t ask for a letter, just published where to find their workshop.
So we should assume that he had the idea and ordered the keyboards from one of the about 30 professional builders working in Paris at that time. It happened more often that people invented a new instrument, asked others to build it, and tried to sell it then.
Mr Vernier seems to be a dedicated father, who had been successful in raising his child and hoped that his ideas could be re-used for others. For commercial or idealistic purposes? We don’t know.

For thirty years David Steinbuhler has been working passionately to convince the world to adopt his smaller piano keyboards. The complexity of these retrofits is such that a retro keyboard was going for $10,000 about ten years ago. Basically the width of a keyboard is determined by the spacing of the string band and the action parts. The more you splay the keys from this basic spacing, the more weak the keys become, and the more difficult it becomes to have acceptable clearance between the angled parts. Thus a small harpsichord has a “naturally” smaller keyboard, and if the strings are perpendicular to the keys (virginal) and the jacks are not too wide, the keys can be narrowed…but the plucking point may be moved. Here is an article about the Steinbuhler keyboard. https://taskpiano.org/wp-content/uploads/2017/01/PTJ-2016-12.AltKeyboards_DSStandards.pdf

I expect most readers are familiar with smaller violins for smaller people. See Regards, Ðale =============

‘the width of a keyboard is determined by the spacing of the string band and the action parts. The more you splay the keys from this basic spacing, the more weak the keys become’

Undoubtedly true. But clavichord builders & organ builders have been doing this for 600 years or more now, and players of these instruments seem to have found a technique to deal with it. The weakness of the keys is less important for these instruments than for the piano, which may be subject to considerably stress in playing. Has Steinbuehler considered keyboard history in his invention?

My link was erased by jackrail. Here’s a picture, showing that smaller sized instruments - violins at least - are still current for smaller people. 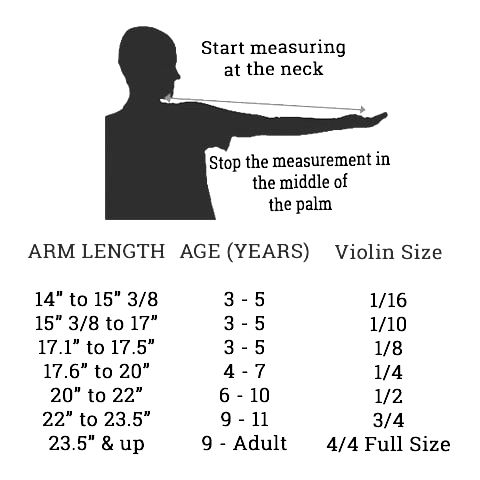 Is all the expense and fuss and trouble making smaller keyboards worth it?
I mean, the little boy or girl only will use it for a few years. And then they suddenly will have to cope with a bigger keyboards at about 12 or 13 yo after 5-6 years playing: what about the aquired motor-muscle-memory? I admit you can’t play octaves at 6-10 yo, though.