I put this in the General section, as opposed to the “instrument building” section, as I think it’s a musical issue as well as a making issue.
Why is the peau de bouffle used - and made - so rarely? With all the perplexities regarding the “real” sound, the best material to use, etc., it seems to me a wonderful tone and surely an alternative to the usual stops (however, the 4’ alone is another stop which I would want to hear more often). The peau de bouffle seems less prone to tire the ears than the buff stop.
It was a late addition to the harpsichord, to be sure, but don’t you think it would adapt very well to much of the music of the previous centuries?

During the so-called harpsichord-renaissance the plectra were often made of leather. It was a bad leather, usually too stiff, the sound was ugly, it was often the only register or the principal register of the instrument, the harpsichord wasn’t fully understood yet, and so on. Maybe there is a psichological refusal of the peau-de-bouffle as something pertaining to an era when the harpsichord were much less faithful to the originals than today?

I found some recordings (some are all peau-de-bouffle, some you must listen to the whole track to spot):

(the repetitions are in peau de bouffle) 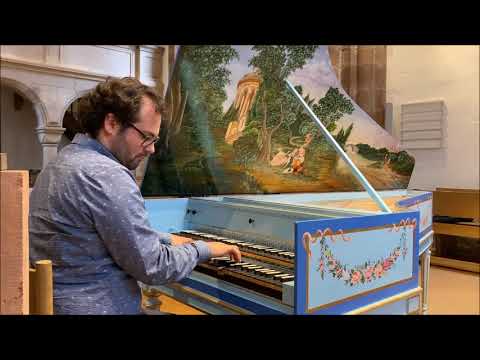 The last two harpsichords are made by the very fine young maker Max Doronin. In the last one you can hear the buff stop as well.

Please, it would be helpful to have timings for the places in these recordings when the peau du bouffle makes an appearance.
David

Of course, here are there.

(the repetitions are in peau de bouffle)

Thanks. The p de b on the Christie recording sounds nice.

Are you sure about the Fischer recording? At the end, the instrument is described as “after Rickers”, so why would it have a p de b on it?

I am no longer sure, indeed. The description says “after Ruckers” but says peau de bouffle as well. When I heard this on my mac loudspeakers I was sure I was hearing a pdb at the timings I gave, but now I am hearing with my iphone (no earphones) and can’t recognize the pdb. I’ll try tomorrow again.

In my humble opinion, the reason why the peau-de-buffle is so rarely used in harpsichord music today is that it is anachronistic. In a letter published in the Journal de Musique, Paris 1773, it stated that Taskin had been fitting this stop into his harpsichords starting in 1768. By that time Mozart was writing his last compositions for the harpsichord, and shortly afterwards only Haydn would write a few. The device was a way to compete in expressivity with the piano (the clavichord was hardly popular in France). Therefore, when we wish to perform early music for the harpsichord, we find that more than 99% was composed before the peau-de-buffle existed.
Today, using it is tantamount to using pedals to change stops during play: it is historical, but it belongs to the 1770s, as a device to compete with the fortepiano, when most composers were actually writing for the latter, no longer for the harpsichord.

Dom, thank you for posting links to these four performances. They are very interesting; Fiedler’s performance of “La Livri” makes me think of an organ piece with a solo reed stop ‎against a principal chorus in the other hand. I never thought of this combination and will look ‎for a chance to try it on my instrument (Hubbard French double), which does have a peau de ‎buffle.‎

As to why more harpsichord don’t have a peau de buffle: I am not a builder so I don’t ‎understand all the interrelated calculations involving scale, plucking point, width of the gap, etc. ‎Is there any downside to have a larger gap to accommodate the extra rank of jacks? Does ‎having the extra rank prevent the back 8′ from plucking at the ideal point (assuming the peau de ‎buffle is furthest from the player)? And, of course, adding a fourth register increases the cost.‎

Claudio is right that a peau de buffle stop is anachronistic for music written before the mid-18th ‎century. But I think we have come far enough from the registration excesses of the early ‎harpsichord revival that we can rely on today’s performers to use the resources of their ‎instruments in a musically appropriate and tasteful way. We program long recitals or record ‎the complete works of various composers; having tonal variety is useful in such situations. And ‎the Ruckers and their contemporaries were obviously interested in having some variety, as we ‎know from the presence of buff and arpichordium stops as well as the 4′. So I agree that having ‎more instruments available with a well-voiced peau de buffle would be a good thing.‎

Hi David Perry! Without sharing the enthusiasm for the peau-de-buffle or any other anachronistic device, let me point out that, in my opinion, the gap width is a non-issue. A few German makers added a 16’ and even a 2’! Their secret is simple: music requiring “full harpsichord” (i.e.with the 4’) never ventures above d’’’. Actually above that note we have a handful of pieces, except for Scarlatti and Soler who did not have the 4’ at all. At this point the solution is obvious: to have the d’’’ as the top note in the 4’ choir. This provides more flexibility in the location of 8’ bridge and nut in the top treble range.