My conclusion is that as a general rule (and there are written-out directions for this) the Rondeau is to be repeated only the first time, then is to be played without repeat between the Couplets and at the end.

This is something I’ve often wondered about. Take a famous rondeau such as Les Baricades mistérieuses. Gilbert’s edition has a repeat for the rondeau only the first time. But, as far as I can see, nothing in the original edition confirms that the rondeau is not to be repeated after the couplets. So what is the basis for this?

This is just one example among many.

I forgot to include the facsimile: 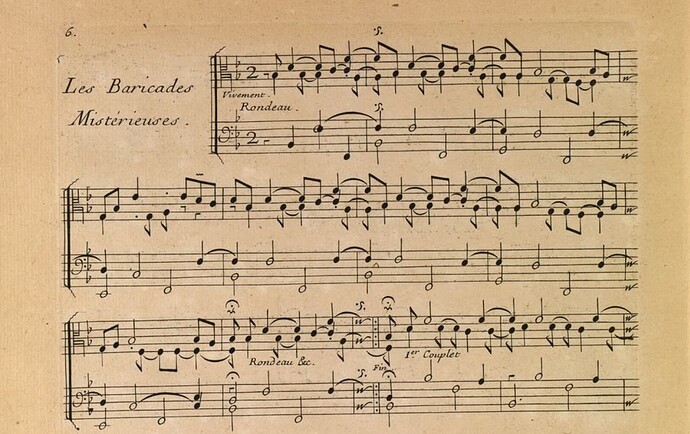 I fully agree with you, Dennis.
Although in the Baricades I prefer (with virtually every recording I know of) to repeat only the first time, there is nothing like this prescribed in the score.
In my book "Playing … ", section “3.8 RONDEAU REPEATS”, F. Couperin is given as an example of a composer who as a rule wishes to have every Rondeau repeated except the final one (often written down with slight differences).

(as for “what is the basis for this” as a more general rule, again, see my book. I am not going to copy-paste from it here)

Although in the Baricades I prefer (with virtually every recording I
know of) to repeat only the first time, there is nothing like this
prescribed in the score.
In my book "Playing … ", section “3.8 RONDEAU REPEATS”, F. Couperin is
given as an example of a composer who as a rule wishes to have every
Rondeau repeated except the final one (often written down with slight
differences).

Thanks, Claudio. I don’t think recordings are anything to go by, since
until now many (if not most) performers use the Gilbert edition. Perhaps
things will change with the new Herlin edition., though I was
disappointed to see that the lengthy front material doesn’t seem to
mention the issue of repeats.

Indeed Dennis: fully agree again.
Over the years, some of my own writings were produced as a reaction not just with some “famous” players, but also with so many harpsichord editions that in their introductory texts fail to explain the basics to the students, or else fail to tackle important performance matters.

Perhaps things will change with the new Herlin edition.,

What is the new Herlin edition?

What is the new Herlin edition?

Unfortunately, the question of repeats isn’t raised. And what makes
matters worse is that this edition simply reproduces the
“non-directional” repeat signs of the original.

"The original edition of the first volume of Couperin’s “Pièces de
clavecin”(1713), supervised by the composer himself, is noteworthy for
its extraordinary notational precision. It contains exacting performance
instructions, for which Couperin created his own symbols. This new
Urtext edition in a modern engraving retains the essential features of
the original print, such as the distinction between curved ties and
straight legato slurs, thereby giving today’s players fascinating
insights into the special sound of this music.

The editor has, for the first time, closely analysed the various proofs
of the original edition, some of which he discovered himself. He lists
these alternative readings in the Critical Commentary.
The edition also presents conflicting versions of several pieces as well
as an anonymous work possibly attributable to Couperin. A detailed
Foreword, notes on period performance practice and facsimile
illustrations round off this edition, making it indispensable to all
admirers and performers of French clavecin music."

Back in the 1970’s everybody considered Heugel (K.Gilbert) F. Couperin edition way too expensive.
I bought it in London in April 1975. Both the Premier and Second Livre still carry the price in sterling: 4.15 each. Adjusted by inflation, this is equivalent to 33.05 pounds today, or €36.40.

Now Bärenreiter (Herlin) is asking €49.00 for the Premier Livre, thus setting new standards not only for scholarship but also for pricing …

It is rather expensive, especially considering that what probably
remains the best edition is available free of charge. As Ralph
Kirkpatrick says in his review of Heugel’s Book II:

“They are beautifully engraved, for the most part under Couperin’s
supervision, and except for minor changes in the plates in the course of
various printings, they constitute unique sources for Couperin’s text,
no autographs having survived. They are more authoritative and cleaner
to read than any subsequent edition until now, and one is tempted to
remark that anyone who is not intelligent enough to master their various
clefs has no business playing this music anyway. Moreover in recent
years my students have discovered that Xerox copies from the originals
cost considerably less than the Brahms-Chrysander edition at current
prices.”