"What's wrong with that harpsichord?"

Without any attempt to emulate our Douglas Amrine’s recent and excellent quiz, let’s have an 2021 end-of-year fun with a few historical harpsichord confusions, just a few of the many examples around. (Most pictures taken by myself.).
I will list what appears at first sight, and await for answers explaining “the true story”, surely known to most of us in The Jackrail. 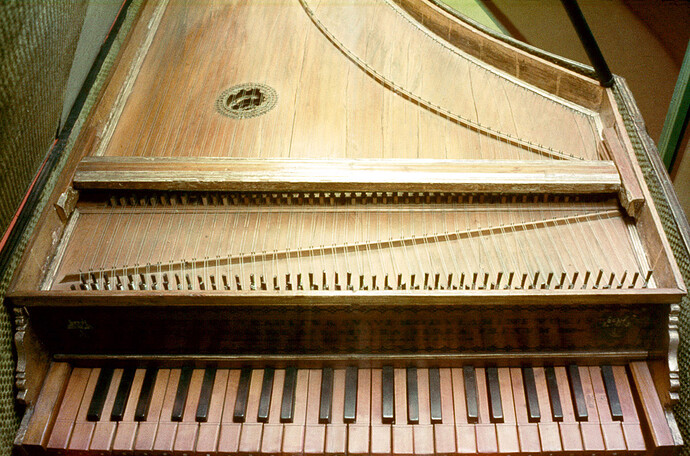 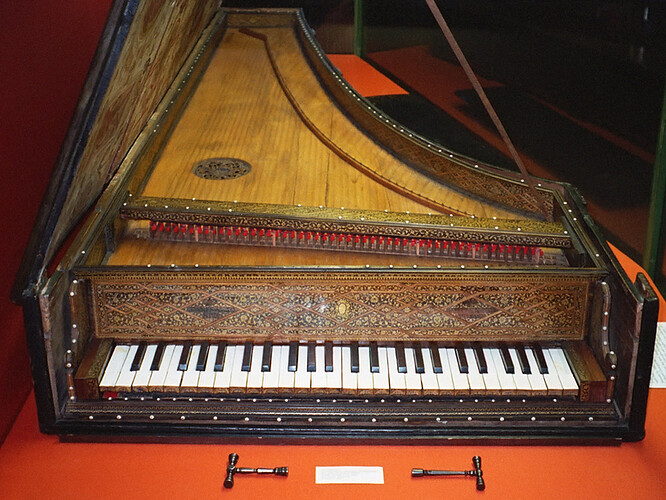 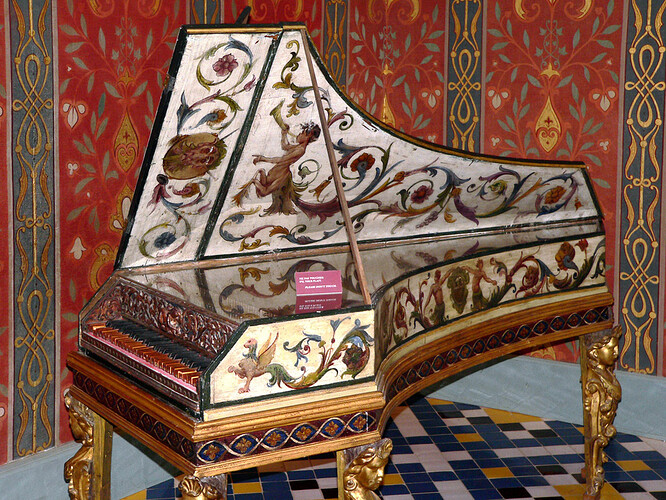 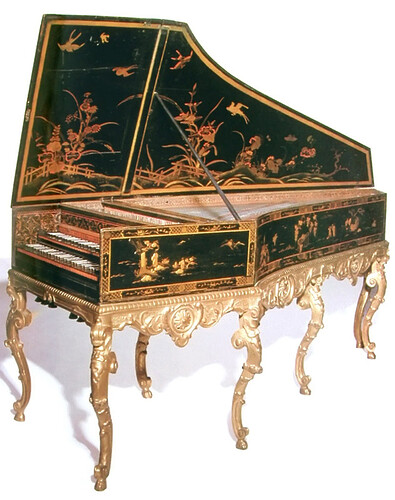 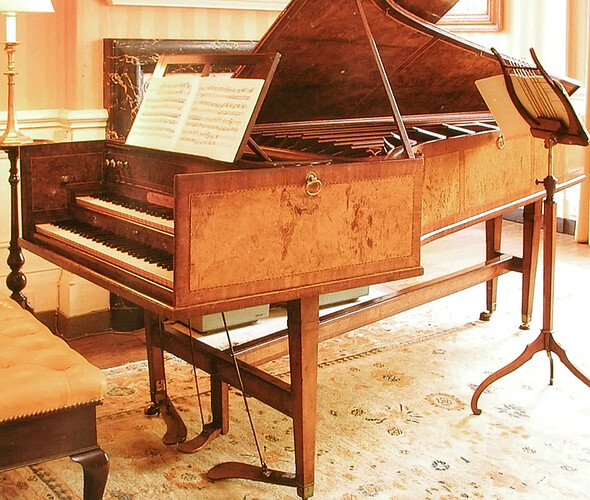 … and maybe many more…

I can only comment on the two Baffos:
The London Baffo has had his (or her? or its?) tail cut somewhen during his history.

The Blois Baffo is a plain fake by Franciolini. In the summer 2014 I visited Blois not even knowing there was a harpsichord there. When I entered the room where the harpsichord was, I had a sensation something was wrong at the first sight.

Yes indeed, but given the exceptional length of the Victoria and Albert Baffo, which is approximately the size of Praetorius’s large “Clavicymbel, so eine Quart tiefer” (Michael Praetorius, Theatrum instrumentorum (Wolfenbüttel.1620)), we can hardly conceive of these choirs literally as 8’ + 4’.
If, as seems likely, the instrument was intended to sound a fourth, or even a fifth, below one of the prevailing North Italian organ pitches, the choirs would more aptly be termed 10 2/3’ + 5 1/3’, or even 12’ + 6’.
Best wishes,
Lewis.

Technically you are absolutely correct, Lewis.
However, I was (quite obviously) using modern-day terms, where 8’ stands for standard pitch, and 4’ for one octave higher. By the way, I just reproduced the terms found in the modern literature on this harpsichord, including the V&A Catalogue of Keyboard Instruments and the Boalch 2 and 3.
Finally, please note that at the time in Italy they would not use “foot” terms for harpsichord pitches either.

I stand corrected, Claudio!
However, the transformation of italians 1x8’, 1x 4’ was something a lot of instruments suffered, isn’t it. Taste changing led to modification of a lot of harpsichords: range, disposition, iron-to-brass strings and so on. Ruckers harpsichords had the same history. I wouldn’t call this “wrong” or “odd”, it seems to me an adaptation of the instrument to the new taste.
On the other hand, some modern makers have copied the Baffo without being aware of the cut tail and copied the same tail angle. But the tail angle is against the bridge angle in the bass, which arrives dangerously near the tail itself, and this seems to me more “wrong” (in fact, it’ a butchery).
However, it’s a funny contest. I just can’t respond to the other questions without looking on the books or the internet.

Ps: you preceded me in Blois, I went there during the summer of 2012…

Don’t forget to give the correct responses to the other questions in a few days, I’m curious now…

In full agreement with your clarifications, Domenico! The tail thing (although centuries old) was a real butchery.

Will provide the remaining answers within a week.

Let us start with my first example, the Hieronimus Bononiensis 1521. Three (!) things I wrote, and are still often read about this instrument, are strictly speaking untrue:

A) This is no longer the oldest extant harpsichord. For a few decades now this title has gone to the late-15th-century clavicytherium in the Royal College of Music, London. Although. with good museological criterion, they decided to build a replica instead of restoring it to playing order, this was a possibility, and therefore it can “theoretically” be considered the oldest “playable” harpsichord.

B) The Bononiensis had originally a single 8’ choir. The second 8’ choir was added at a much later stage.

C) Now that the V&A Instrument Gallery has closed, the instrument is “no longer in display”, and with the other instruments it may be in the process of being sent away to another museum.

It is very sad to see the scarce interest in my EOY post, or of most posts in this forum for that matter.

For what it’s worth, dear members, here you have the other answers.

“Goujon-Ruckers”
This may be a fake ravalement, but you are a lucky man for playing so much these invaluable harpsichords!

It is very sad to see the scarce interest in my EOY post, or of most posts in this forum for that matter.

I was unable to respond as I have no idea about these matters. Being isolated here in Australia, one has very little opportunity to see these instruments, and the days when the government would award study scholarships to go overseas for instrument makers stopped in about 1975.

So, your quiz was far too hard for me! Although I will say the Francilolini fake stands out a mile. How could they have ever fooled anybody even at the time?

Indeed, Domenico. It was easier to get access to those instruments 50 years ago than it is now.

Dear Claudio,
Scarcity of replies does not necessarily mean lack of interest. It could be that your quiz was too difficult for many people.

So far as I know early Italian harpsichords were 8’+4’ or 8’ only so I guessed that this was what was wrong with the first two; but apart from occasional visits to musical instrument museums, mostly in Germany, I have not sufficient knowledge or experience to attempt the remainder.

This forum is extremely valuable, but replying to every post is not obligatory if one has nothing of relevance to say.

Dear David, I expected a better explanation from somebody versed with statistics!

You are correct that the quiz may have been difficult for many, but I expected the rest to know: these are very well known instruments.

You say “nothing of relevance”. Actually, I was not asking for verifiable answers.
I wanted to hear opinions, so that we all had EOY fun, even with wrong answers!

Whatever … Have a Happy New Year!

I did not see this little contest until the answers were already posted. But I was surprised that no one immediately guessed that the 4th instrument was an original Goujon rather than a Ruckers. This instrument is quite well known–I remember reading about its true provenance in Raymond Russell’s “The Harpsichord and Clavichord,” 2 ed, which I acquired back in the 1970s.

I own an Italian spinet by the late Jerome Prager, who made harpsichords in Los Angeles back in the '70s and '80s. His “magnum opus” was a copy of the Goujon, complete with an accurate reproduction of the elaborate gilded stand. Unfortunately, Jerry never found a buyer for the harpsichord with the stand–admittedly, it was a little over-the-top–and the instrument was sold without the stand. Fortunately, I have high-quality color photos of the instrument on the stand before they were separated. Jerry stopped making harpsichords shortly after, and passed away a few years ago. He was a true gentleman and an excellent craftsman.

I am happy to report that my hip replacement is healing nicely and I wish all of you a healthy and prosperous 2022.

I am pleased ot hear that your hip replacement was successful, and to see you participating here.

Possibly the best therapy for the hips is to take up the organ – with pedals. Running through JSB’s F major Toccata, BWV 540, every day before breakfast should do the trick!

HI Jay. AFAIK the fake was discovered by Hubert Bédard when he restored the instrument in the 1960s. This is consistent with the caption in Fig. 2I of Raymond Russel’s book you mention, revised ed. . 1973: “Until recently this harpsichord was thought to be an instrument of 1590 by Hans Ruckers …”.
Best regards,
Claudio